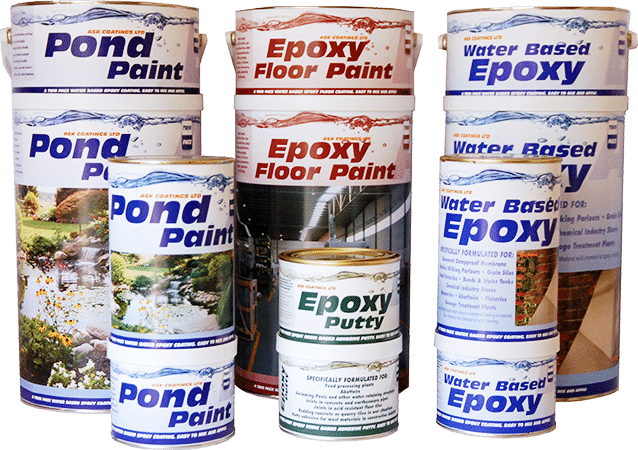 Our Epoxy products are ideal for many applications, both commercial and domestic.

We provide a complete range of free technical Epoxy Data Sheets which can be downloaded directly from our website or sent via email or post by contacting our Epoxy paints and putties customer service team.

ASK products are packaged in attractive recyclable tins, held together with secure joining rings and labelled with complete instructions, making them safe and easy to use.

Safe and easy to use

All our epoxy paints are manufactured and packaged on site and we pride ourselves in sourcing almost all of our raw products and packaging from the UK.

Our Epoxy Coatings and Putty Products are delivered quickly across Mainland UK and we often offer FREE delivery regardless of the size of order.

At Shirley Aquatics we value the suppliers that look after us and always try to put as much business their way as we can. Al at ASK Coatings has always offered extremely good service and has often helped us out of a tight spot when we needed stock in a hurry. ASK Coatings are one of those rare companies that go the extra mile to ensure exceptional customer service

Mid last year our main water feature was losing over a cubic metre of water per week, and as they were clogged with mud, I decided to bite the bullet and drain them down to clean and examine them for damage. Once the mud had been removed, it became apparent that there were many cracks that had developed over the previous 30 years, so suspect points were raked out and re-rendered. After the requisite time to cure, paint choice was needed, and we decided on ASK coatings water based epoxy, as we had found an old tin of black from the late eighties, which seemed to still be serviceable. We chose the stone colour, which we applied to the walls, and the old black to the floors. Both paints have proved to be as effective as one could wish for. If you need to seal a pond or the like, do not hesitate in choosing ASK Coatings products. I have been recommending them to others in need, and we all agree that their products are perfect. I have other missions in mind that will need a similar product, and I will be looking nowhere else than ASK

Further to my letter to you dated 9th July when I spoke to your Mr. Williams concerning Pond Paint which he recommended as suitable for painting our water feature bowl which had become degraded over the years and was looking

For trade customers who wish to set up and register an account, please speak to our sales and service team.

We have a number of registered distributors across the UK. Contact our sales team to find out more.